Most coding tasks nowadays are fairly well supported and documented and if you get into trouble you can usually do a Google search, open Stackoverflow and find a bit of help if you dedicate enough time. However, blockchain and all connected technologies are relatively new, change rapidly every day and the supporting infrastructure is just not what we are used to with other more “traditional” development projects. Just to give an example, there are many test networks you can use but most we found are fairly intermittent and I would say unpredictable at times so you will definitely feel at times that you need to experiment and cut your own path.

This guide is meant to provide help with that through a real project in which we are deploying a pre-existing Smart Contract and later connecting to and interacting with it. After deploying the pre-written smart contract we are able to add new stakeholders, vote and transfer funds as well.

The goal of this tutorial is to deploy a smart contract to the Ethereum blockchain. Writing the contract itself is out of scope, we will use the code of an existing contract which can be found here:

Interacting with a deployed contract 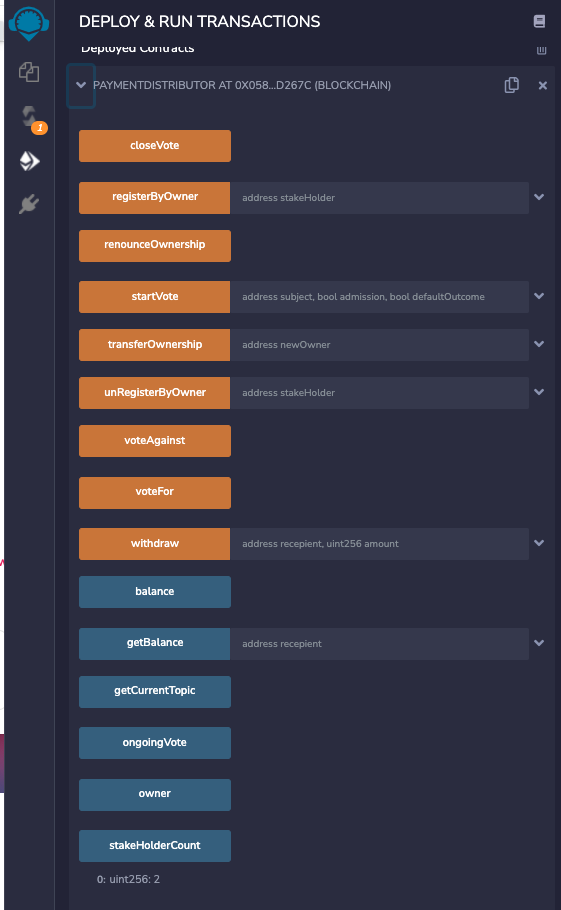 Connecting to an already deployed contract

Once a contract is deployed to the blockchain it remains there forever. Of course you may want to interact with it later. In case you want to reconnect Remix to a contract deployed in the past do the following:

The newly deployed contract has no stakeholders by default. There are two ways to add new stakeholders:

Both approaches has their on limitations:

Adding a stakeholder by the owner

Adding a stakeholder by vote

True in this case means there is a vote in progress.

A vote can be closed at any time by the contract owner. There can be two outcomes:

To close a vote do the following:

Transferring funds to the contract

Here, the value after uint256: contains the balance of the contract in WEI.

This tutorial was written by Peter Neumann, Senior Full Stack Developer here at Canecom who is researching blockchain technologies since 2020. If you have questions regarding the tutorial or have a project idea you would like to discuss please get in touch with us.